MOGAI-archive was the first good archive of MOGAI genders, orientation, etc. The blog was active on Tumblr for less than a year, with their activity spanning from June 2014 through March 17, 2015. It’s unknown when the blog began posting, as the blog was deleted and there are fairly few reblogs of their posts.

During the short time they were active, the blog coined 229 terms in total. Because of them being the first large MOGAI archive blog and coining as many terms as they did, the blog and it’s content are the basis for the MOGAI community today.

Despite MOGAI-archive’s effect on the MOGAI community today and how much it set it up and contributed to it, the blog is now largely remembered negatively, due to a disastrous and messy end to the once beloved archive blog.

The name of this blog is also what inspired the name of MOGAI-watch, meaning she was watching the activity of MOGAI-archive, rather than essentially stalking MOGAI blogs and people, as some believe.[1]

Because of there being essentially no trace of the blog left on Tumblr, we don’t know much about the moderators. With what is left, we do know this much. The blog started out being run by Mod Cade and Mod Zody[2]. At some point, Mod Zody left, with the number of mods growing to seven not long after. Other than that, all we know are the mod's names and pronouns at the time:

On March 17, 2015, Mod Ezra deleted MOGAI-Archive out of disgust, after someone posted the term “panplatonic” to the blog. Mod Ezra described the decision, saying this[4]):

On March 17, 2015 the MOGAI-archive blog was deleted by Mod Ezra (Ezrawave) due to the posting of the term "panplatonic", despite them not actually being the creator of the blog. Ezra later put out a statement, giving their reasoning for deleting the blog. Even with panplatonic being what pushed them to delete the blog, Ezrawave also gives a few other reasons for them finally deciding to delete the blog.[5]

The term panplatonic was later posted to new-mogai-archive, causing Ezra to respond on a personal Tumblr blog that “THIS POST WAS THE REASON I DELETED MOGAI ARCHIVE.”[6] This is the last time (that’s currently known) that Ezrawave has mentioned the blog.

Part Two: The Blog Gets “Hacked”

Making things more confusing, someone grabbed the MOGAI-Archive URL before Ezra (Ezrawave) could grab it. This person claimed, falsely, that they hacked the the MOGAI-Archive blog and caused it to be deleted. Roughly around March 18, 2015, the self proclaimed “hacker” said this on the blog, funnily enough, referencing the term panplatonic[7]: 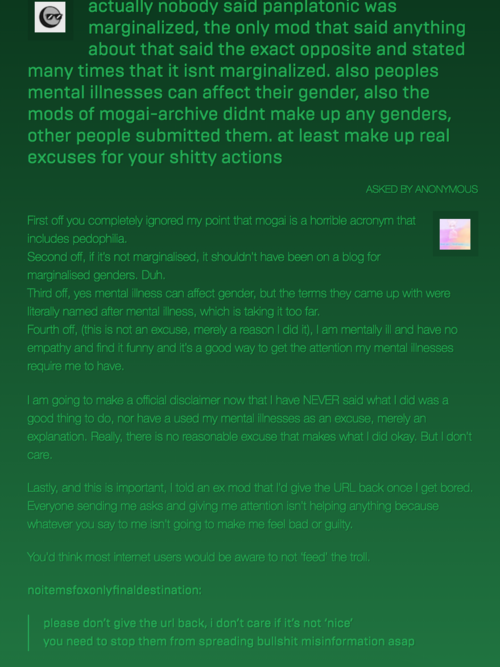 Even though the hacking was fake, a number of Tumblr users believed that it actually happened.[8]

After the Psy fanblog was deleted, two new mods who went by the names Treant and Chicken[14] took over the blog. This happened in either late April or early May. At first, the new mods tried to run the blog the way it had been in the beginning with the original mods, with people submitting terms to be archived by the blog. However, unlike the original MOGAI-Archive moderators, the new duo worked on shutting down and weeding out the obvious troll submissions that the original mods fell for.[15]

All of that changed on May 5, 2015, when the mods took the request for a troll gender seriously- the gender in question being Bofa-gender. Right after that happened, the moderators put out a statement, that they would only be posting MOGAI headcanon posts, rather than terms as they had.[16] 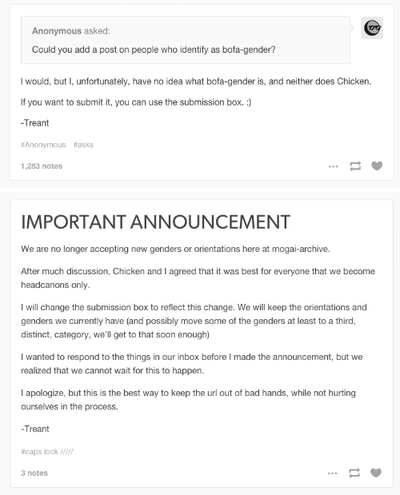 Not long after that statement, the blog was deleted entirely.

After MOGAI-archive, a number of copy-cat blogs rushed to fill the void in the MOGAI community that was left by the blog.

Alignment-Archive[17] was made the day before MOGAI-Archive was deleted, though, in all likelihood, not by Ezrawave.[18] This was one of the extremely short lived blogs.

New-mogai-archive is yet another short-lived attempt to replace the original MOGAI-archive. The blog reposted the term panplatonic, causing ezrawave to state that the term is the reason that the first MOGAI-archive was deleted to begin with.[19]

Themogai-archive[20][21]as another short attempt to recreate MOGAI-archive. All the content was posted in less than a week, spanning from between April 7 to April 13, 2013. Most of the archived content archived from the blog consists of one of the moderators (Mod Virgil) and some of their friends harassing and suiciding another moderator for being “transphobic,” purely for her trauma around typically male genitalia [22]

The blog ran for nearly two years, with it’s run spanning from April 2015 to January 2017, making it the longest running blog on this list. However, it was primarily inactive during that time period.[23][24]

While not necessarily made to replace MOGAI-archive, these two blogs fall into a similar category as the blog and have been the best and longest running MOGAI archive blogs since the original. While lgbtqiarchive[25] also collects flags from the general LGBT community and for their terms, as well as flag redesigns and often edits, Variant-Archive[26] seems to hold more closely to the original MOGAI-archive in only having MOGAI coining posts on the blog.

Other than Varient-Archive and lgbtqiarchive, there are a number of other term collecting and archive esqe Tumblr blogs, through most of them don't have the same giant library of terms as those two. These blogs include sunset-mogai-archive[27], mogay-hell[28], and other similar accounts.

During its run, MOGAI-Archive coined just shy one of 230 terms, which helped build the community to where it is today. Their terms are listed below.

Retrieved from "https://the-mogai-community.fandom.com/wiki/MOGAI-archive?oldid=4183"
Community content is available under CC-BY-SA unless otherwise noted.